Purple Martins migrate each spring from their wintering grounds in South America to their breeding grounds in North America.  Until recently, only the final destinations and a few stop-over locations were known from banding data, but not the exact routes or the duration of the journey.

In 2007, in partnership with York University in Toronto, Canada, the PMCA deployed geolocators on adult Purple Martins.  Geolocators are tiny devices that are secured on martins like backpacks and gather sunlight data.  This groundbreaking research allowed us to answer many questions about Purple Martin migration including both northern and southern routes, and how long the journeys take.

Martins are fitted with geolocators during the summer at their colony site.  The next year, after they return to the colony site, the birds must be caught and the geolocators removed.  Geolocators collect light levels every minute of the day.  Sudden changes in light levels are usually due to sunrise and sunset and this helps determine the longitude.  Latitude is harder to estimate and based on day length.

Since 2007 geolocators have also been deployed at colonies in Texas, New Jersey, South Carolina, Virginia, Florida, Minnesota, South Dakota, Ontario and British Columbia.  Through the 2014 nesting season the PMCA has deployed geolocators on over 100 adults and subadults. 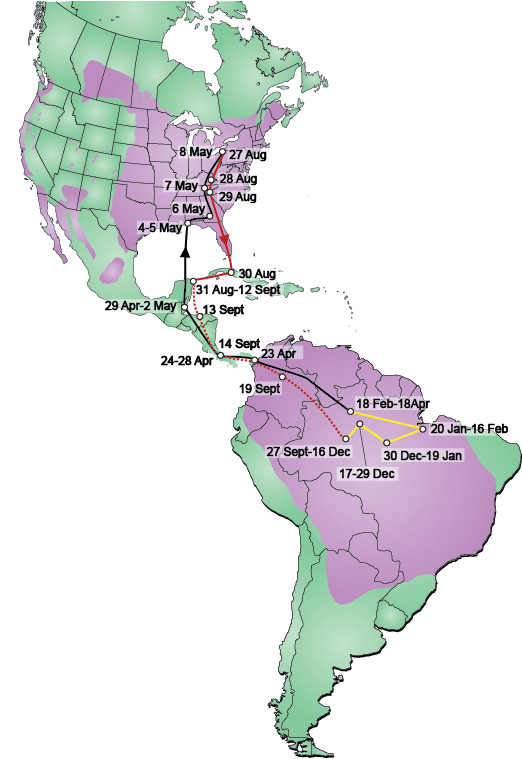 In 2014 the PMCA deployed the first GPS tags for Purple Martins at their colony sites in Erie, PA. 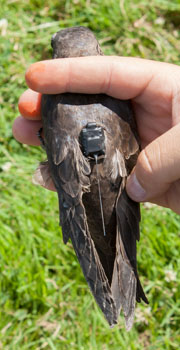 The data we’ve gathered is fascinating.  Here are some of the more interesting facts we’ve discovered from geolocators data:

Recommended Reading:
Tracking Purple Martins to Brazil and Back!