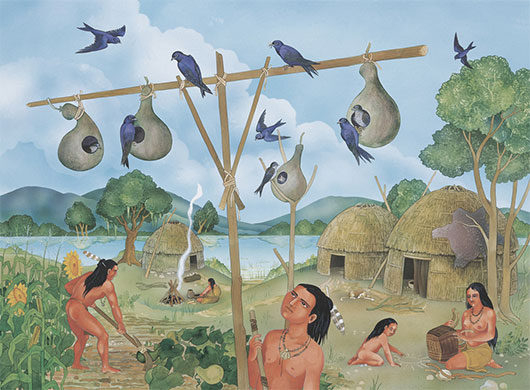 Purple Martins are considered secondary cavity nesters—they do not excavate their own cavities such as woodpeckers.  Instead they use cavities that are already created, either by other animals or in natural cavities of cliffs and rock formations.  Traditionally Purple Martins nested in natural cavities such as old woodpecker holes, on rock ledges, or in dead trees.  However, thousands of years ago, people began providing man-made housing for the Purple Martins in the form of dried, hollow gourds.  Over time, the successful nesting of martins in these man-made homes, paired with the decline of natural cavities, led to a complete behavior shift within the eastern species.

In the Pacific Northwest, Purple Martins still use secondary cavities like abandoned woodpecker holes, but they will also use single-unit nest boxes.  In the Southwest, they use cavities in saguaro cacti.

This tradition shift in the eastern subspecies of the Purple Martin is rare.  Only three North American bird species have undergone a complete tradition shift in nesting behavior.  The others are Chimney Swifts, who nested only in huge, hollow trees and Barn Swallows, who nested in the mouths of caves or other rocky niches.  Today all three of these species nest only on or in man-made structures.