Citizen-Science involves the contribution of data or observations from the public to an organization that has a scientific interest in collecting the particular data for study.

There is probably not a better subject for Citizen-Science participation than our very own Purple Martin!  The eastern race’s habit of only nesting in man-made housing and in proximity to humans, coupled with the level of attention and management we give to the bird; lends well to using enthusiasts to gather and provide the PMCA valuable data.  In fact, our gathering of data through Citizen-Science dates back to 1995 with the initiation of our Project MartinWatch and now includes three other projects.  These are described and linked to below.  We invite you to participate in them all. 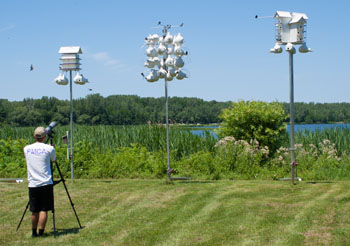 This project is one of the most involved, but most important Citizen-Science projects under our leadership.  Project MartinWatch is a program of regular and frequent nest monitoring, beginning with nest-building and lasting through the fledging of the last nestling.  It provides data ranging from housing, cavity-type, and size; as well as ranges of nest-initiation dates, clutch-sizes, and ultimately nesting, hatching, and fledging success.  Project MartinWatch is a long-enough established and powerful-enough dataset that many of our outside research collaborators find value in it and are interested in partnering with us in order to link their objectives to this dataset. The fact that this program encourages regular monitoring has the added benefit of allowing the participant to observe problems occurring in the colony as they begin to occur, and intervene before the problem reaches irreversible levels.

Perhaps our most popular Citizen-Science project, the Scout-Arrival Study is a long-running one that tracks the northward migration of the first Purple Martins to be sighted at individual colonies.  We are a passionate lot, and love to anxiously watch the wave of migration move northward beginning around Christmas time each year (Florida).  However, Scout-Arrival Data holds much more importance than satisfying this passion.  It is important from a management standpoint by giving us an idea when to open-up housing.  Otherwise, we would unnecessarily allow House Sparrows and European Starlings to become established at a time when Purple Martins are simply not around.  The Scout-Arrival Dataset is also important from a research standpoint as it allows us and our collaborators to monitor possible changes in arrival dates over time.

The PMCA has been banding Purple Martins at our colonies and other sites since 1987.  Use of color-bands in addition to those issued by the U.S. Geological Survey when coupled with scanning and reading is a valuable scientific tool.  Our extensive and long-running banding data set is a valuable one for studying dispersal, survival, longevity, colony and nest site fidelity and any other subjects where knowing individuals is important.

Pioneered by PMCA collaborators from York University, the use of geolocator data-loggers to collect information from Purple Martins during the non-breeding season has shed much light on the migratory pathways, important stopover areas, and distribution during their winter stay in Brazil.  These tiny devices are deployed on adults at their breeding colonies and then have to be retrieved and downloaded following their arrival the following spring.  The PMCA has been involved with research using geolocators since 2009.