During the breeding season there are four distinct age/sex classes for Purple Martins.  These are adult male, adult female, subadult male, and subadult female.  After nestlings fledge, there is a fifth distinguishable age class of juvenile.  Juveniles cannot be sexed by plumage.

The age classes are sometimes described as ASY or After-Second-Year for adults; SY or Second-Year for subadults, and HY for Hatching Year for juveniles. 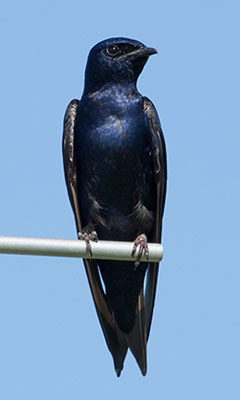 Adult males are the only Purple Martins to have iridescent, purple feathers covering the entire body.  They do not get their full plumage until the 3rd calendar year 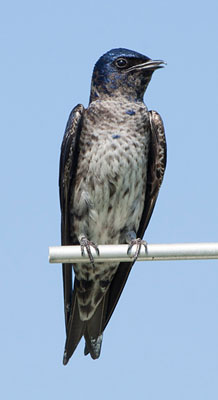 Often the hardest to identify, will have at least one, but usually many solid-purple feathers either on their chins, throats, bellies, or undertails. 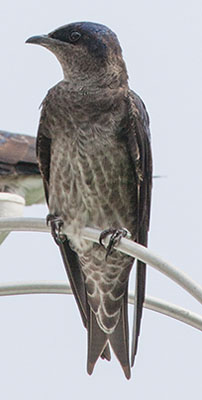 Adult females have more purple on their head and back than subadult females.  Their undertail feathers are much darker than subadults—all brown/grey feathers with a white rim on the outer edge.  They will not have any purplish feathers on their chest, belly, or undertail.

Subadult females have a much lighter purple to brownish color on their back feathers.  The undertails are all white or light-colored feathers with brown pinstripes down the center. 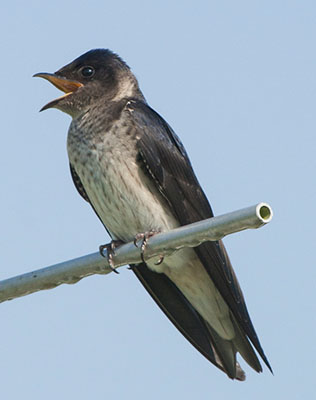 The sex of a hatching year or juvenile bird cannot be determined by sight.  Hatching year Purple Martins will have a stubby tail—shorter than the wing feathers.  They are a dull brownish-grey color and still have yellow inside their beak.

Tattletails: How to ID your martins