Opening housing at the right time is critical for success. Purple Martins only use housing during the breeding season. The first martins to arrive in an area are referred to as scouts. Scouts tend to be adult males looking for suitable nesting areas that will best attract females. Subadult martins (last year’s young) will begin arriving 4-12 weeks after the first adults.

Until the birds begin to arrive back from migration, keep houses and gourds closed. This will deter other native and non-native cavity-nesting birds, such as Tree Swallows, bluebirds, House Sparrows, and European Starlings from claiming the housing.

Study the Purple Martin scout arrival map below to estimate the arrival date of adults in your area.  Have your housing up but with the entrances closed when the adults are due to arrive.  Purple Martins exhibit site fidelity which means that as long as they had a successful breeding season the year before they will return to that same nesting site. 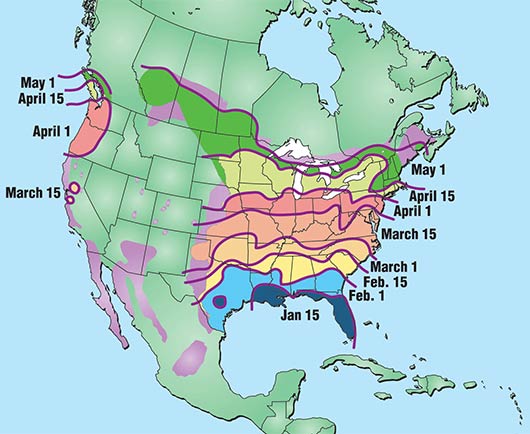 Your housing has the opportunity to attract nesting martins well into the summer, as martin migration is a drawn-out affair. Martins can begin nesting up through the end of June.

Do Not Close Housing Too Soon. Do not close the entrance holes or take the housing down until late August, or mid-September for northern regions. Fledglings may be exploring breeding sites for next year.