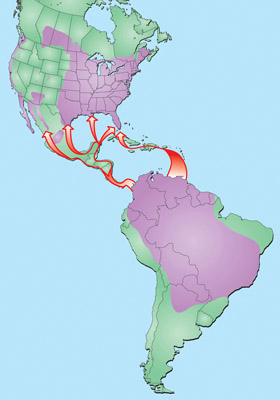 This changed in 2007 when the PMCA, with York University, deployed the first geolocators on Purple Martins.  You can learn more about geolocators and GPS tags here.  This research allowed us to view the migration paths of the eastern Purple Martins, as well as the duration of the journeys from North America to South America.  Geolocators have given the PMCA and other researchers insight into the many different routes that martins take between the breeding and wintering grounds. 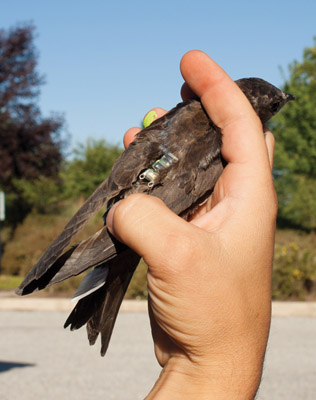 We now know that while the fall migration, from the US to Brazil, is a more drawn-out affair.  The spring migration is much quicker than we anticipated.  This is supported by the thought that martins will push to be the first bird back in-order to secure the best cavities and mates.

The journey from Sao Paulo, Brazil to the PMCA headquarters in Erie, Pennsylvania is approximately 5,000 miles.   Most martins that are part of the Pennsylvania breeding population tend to leave Brazil and travel through Colombia and Central America to the Yucatan Peninsula.  From there they make a trans-gulf flight, hit the United States between the Florida panhandle and eastern Texas.  The majority arrive between Mobile, Alabama and New Orleans, Louisiana.

While some martins that breed on the East coast take similar routes as those that breed in Pennsylvania, others have been found to “island hop” or leave from the Yucatan and touch down in the eastern areas of Florida.   Those that island hop leave Brazil and make their way into western Venezuela.  They then cross the Caribbean to Cuba and other islands.  Eventually they arrive in North America through Florida.  Eastern Purple Martins (Progne subis subis} that breed in the western areas of the sub-species range make a trans-gulf flight, or take the land route through Mexico.

The migration routes that individual martins take will vary from year to year, or even within the same breeding season. We are still learning about the Purple Martins’ migration habits in different areas but it once again shows how amazing these birds are, and how far they travel each year.  The maps below show two individual martins, one who nested in Erie, PA and one who nested in Corpus Christi, TX. 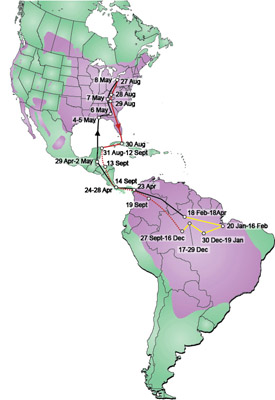 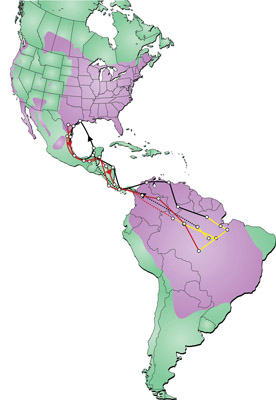