After spending a few months in Brazil, Purple Martins will begin their long migration back to North America.  There are several paths of migration they could take:  follow Central America and Mexico up to the US, island hop across the Caribbean, or follow Central America up partway where they will cross the Gulf of Mexico over to Louisiana and Florida.  This migration can take weeks or months.

The first adult martins to arrive at their breeding grounds are termed scouts, the oldest birds, male or female, returning to their nesting site from the previous year.  Throughout North America the timing of the return of adult martins varies from year to year. 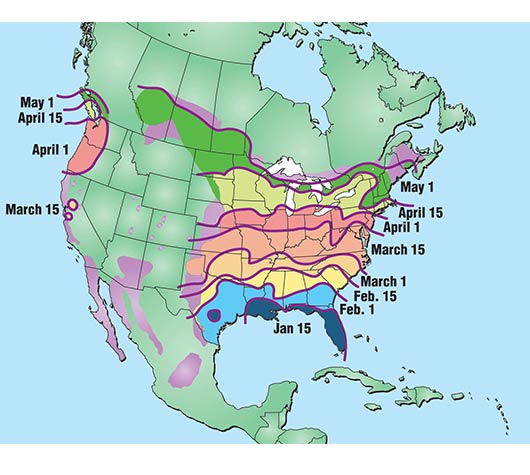 Nest building begins about four to six weeks after martins arrive at their final breeding site.  Nests are generally built out of twigs, straw, and mud.  Mud damns in the front of the nest are common.  Nest building can take three to four weeks to complete.  The last stage in nest building is linking the cup with green leaves.  The function of the green leaves is still unknown, but is thought to act as an insecticide or may help in regulating the temperature and moisture levels in the nest. 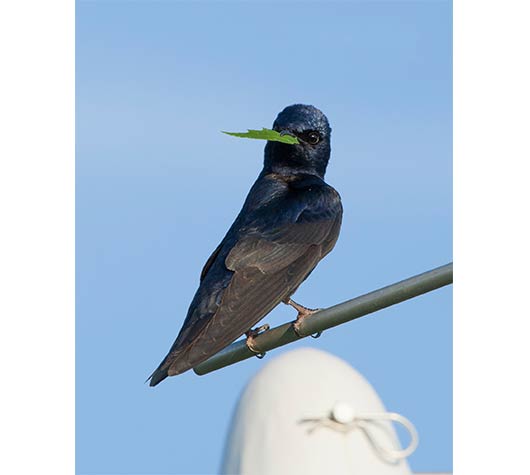 The Dawnsong is a vocalization sung by adult males in the early morning hours to attract other martins to their colony site.  Dawn singing coincides with adult egg-laying and lasts until the migration of subadults has ended.  It can be heard for many miles during the pre-dawn hours and is a very effective attraction technique.

Although it is rarely seen between bonded, paired birds, it is sometimes seen as forced or extra-pair copulations among martins that are not paired up for the breeding season.  It is believed that copulation between pairs occurs in the nest cavities.

Egg laying commences after copulation occurs.  Females lay one egg per day, usually in the morning, for a total of two to seven pure white eggs

After the penultimate, or next to last, egg is laid, females begin incubation.  Only females can incubate eggs because only they have a brood patch, a featherless area rich in blood vessels that transfers heat to the eggs.  Males may insulate the eggs for short periods of time while the female leaves the nest.

Fifteen to sixteen days later, the eggs begin to hatch.  The eggs may not hatch on the same day, but rather it can be spread out over two or even three days.  Once the young have hatched, both parents begin feeding the young.  Pin feathers and downy feathers begin to emerge after 7-10 days. 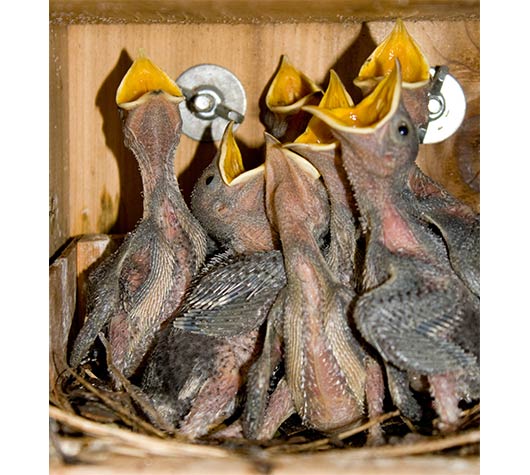 Fledging occurs 26-32 days after hatching.  The young receive care from their parents for one to two weeks after fledging.  During this time, the young may return to their housing to spend the night.

After fledging, juvenile Purple Martins, as well as adults and subadults will congregate at a roost.  Large flocks of martins gather to spend the night at these roosts, which are usually situated near water or in trees.  Martins will then form smaller groups and begin migration from these roosts.  Although individual roosts remain active for six weeks or longer, individual birds may only stay at a roost an average of four weeks.  They then begin their long migration back to South America.

Most Purple Martins overwinter in Brazil, in large urban roosts.  It is while in South America that they undergo their annual molt.  Though they begin molting in North America, they don’t molt their flight and tail feathers until they have reached South America.  Subadults will gain adult plumage, hatching-year birds will get their subadult plumage, and adults will get a new set of adult feathers.  Molting replaces damaged feathers and also helps rid the martins of parasites.